Monica Fenton is a rising senior studying archaeology and anthropology at the University of Pennsylvania. She has worked in the Penn Museum Archives, Near East Section and American Section. Her research interests include the ancient Americas, bioarchaeology, mortuary practices, gender, and gendered violence. This summer, she will attend the MOCHE-UNC Field School in northern Peru and conduct an original research project on non-specific stress indicators in a sub-adult skeletal population.

The MOCHE-UNC Field School will be excavating high-status and low-status residences at the site of Quebrada del León in the middle Moche valley on the north coast of Peru. This large Moche town was occupied from 400 BC to 700 AD. Researchers with the Moche Origins Project hope that excavations will give insight into how the Southern Moche State developed and how highland and coastal cultures interacted in this intermediate area.

This week, I dove headfirst into my independent project and spent all week at the bioarchaeology lab (aside from Friday when my illness got worse again). Completely separate from the field school artifact lab in Huanchaco, the bioarch lab is located at Huaca del Dragón, a Chimu platform mound in Trujillo's La Esperanza district. 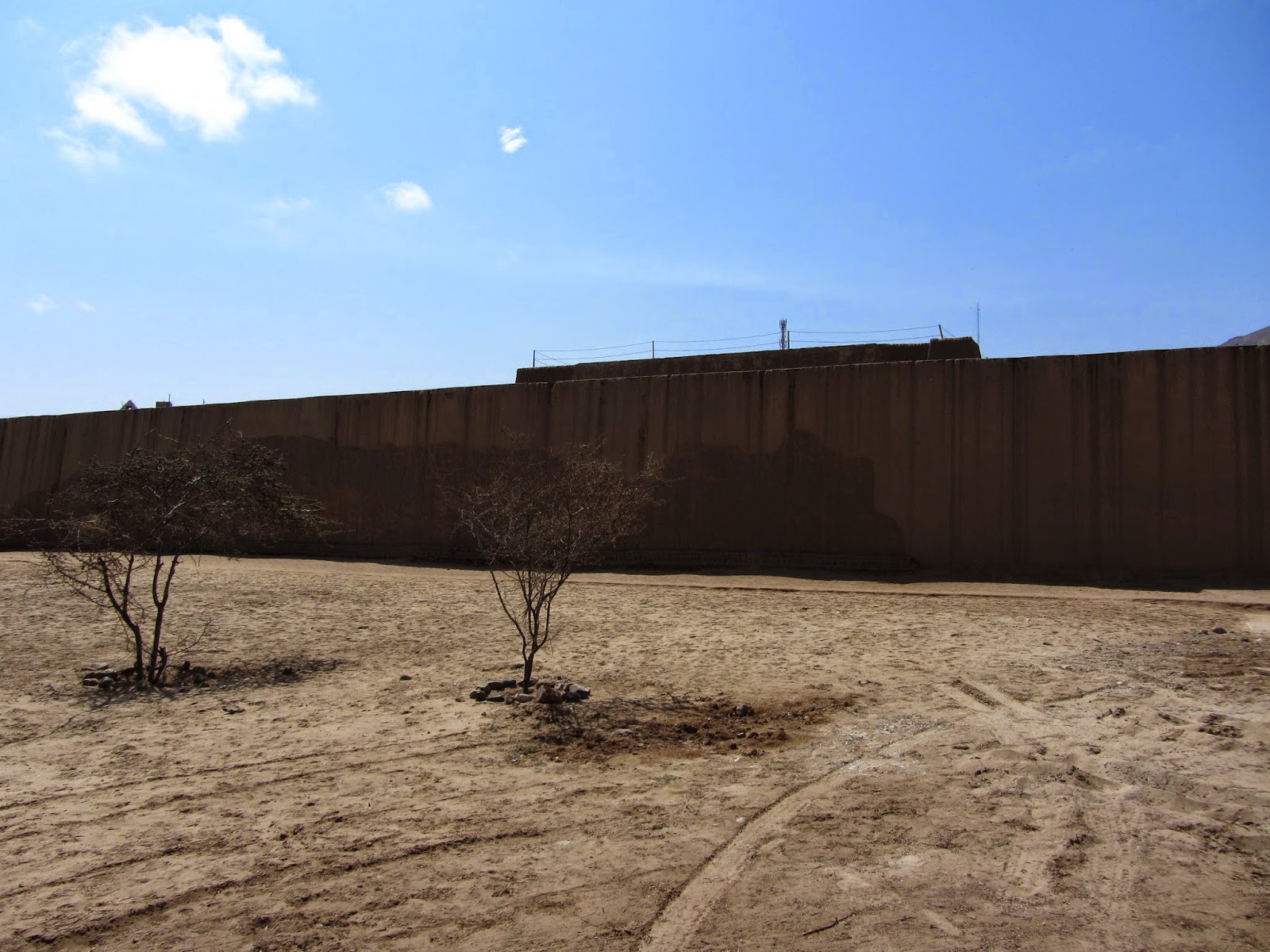 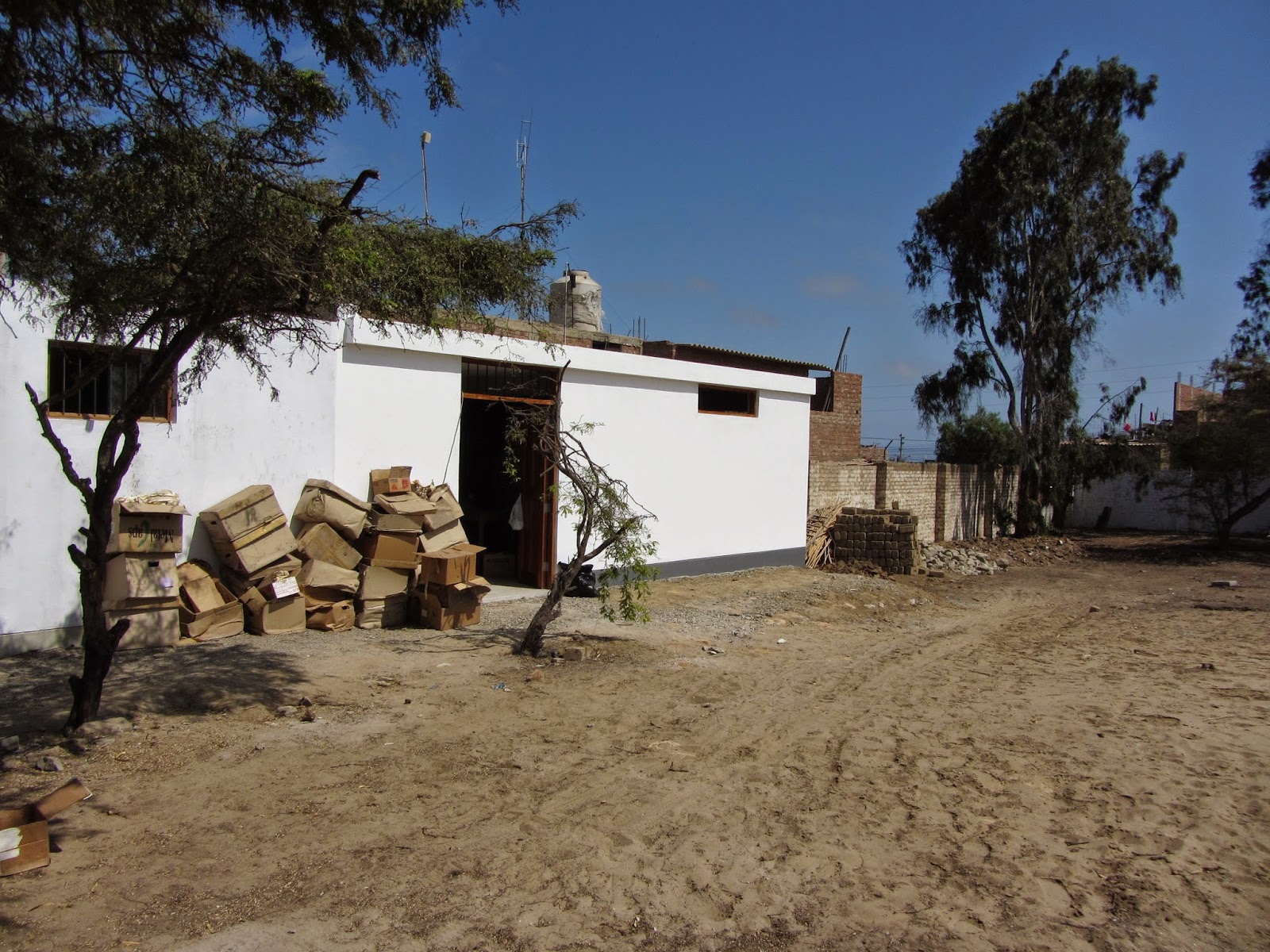 The storage-shed-turned-labAs I mentioned last post, I had prepared to research linear enamel hypoplasias in subadult remains from Cerro Oreja. Linear enamel hypoplasias, or LEH, are horizontal grooves on the teeth that originate from periods of high childhood stress that disrupt enamel formation. If you have a timetable of tooth development, you can pinpoint the age at which the stressful event occurred. Alas, it was not to be... 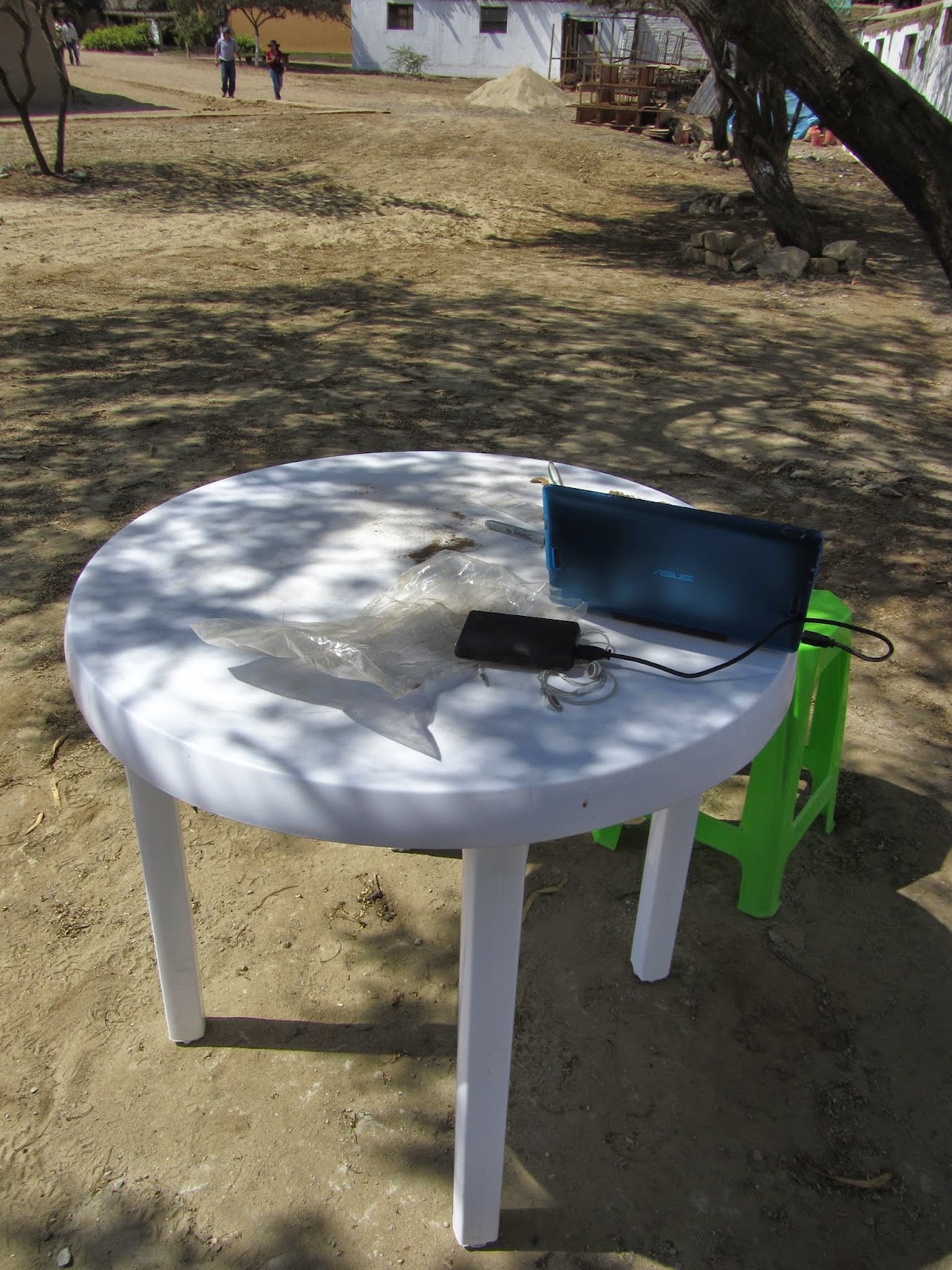 My workstation: laptop, removable harddrive, plastic table, plastic stool, paintbrush. I had to work outside because the lab space was so small. At least there was shade...Despite knowing nothing about zooarchaeology going into this, I learned fast through first-hand experience and Dr. Gagnon's help. For each context--either a single burial in the cemetery or a single layer of an excavation unit in the town--I recorded the type of animal (small/medium/large mammal, bird, fish, etc.), the species when I could determine it, the age (adult or subadult, based on whether all present epiphyses were fused), the minimum number of individuals that could be represented, and the number of bones and fragments.  Most of the remains were large hoofed herbivores (llamas, alpacas, or deer) or dogs...very young dogs. Doing a project on dead puppies was a little depressing. 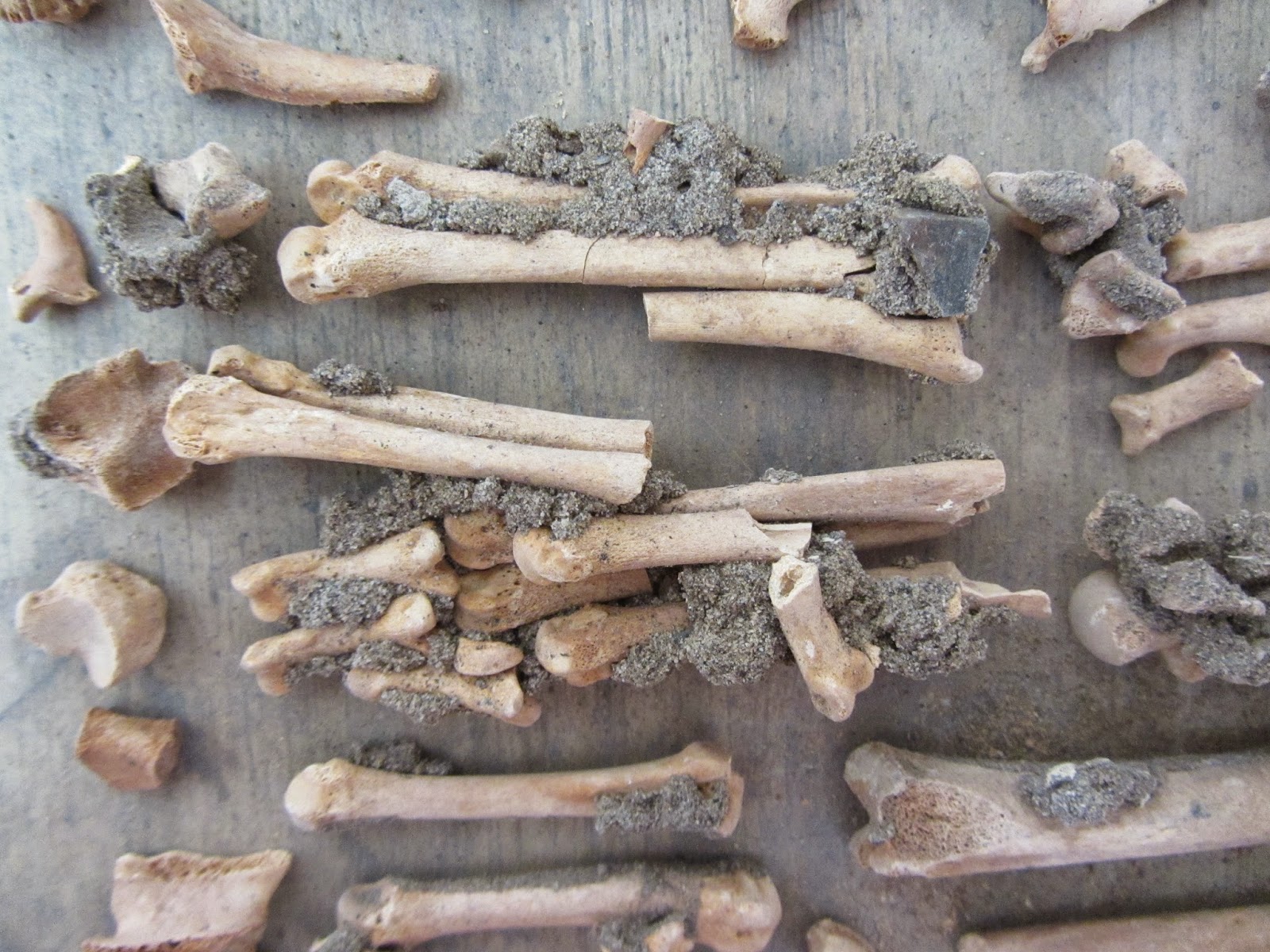 Close-up of a dog paw, partially articulated with dirt and small amounts of soft tissue.I have a decent amount of data from both domestic and cemetery contexts, and plan to talk to Penn's zooarchaeologist about whether my data set is good enough to use for my senior thesis. Dr. Gagnon has already sent me an English translation of the site report (so I thankfully won't have to rely on my subpar Spanish). Now all I need are the appendices that date each burial, so I can see if the way people used animals changed over time. I worry that the site report doesn't adequately explain how the town contexts are related to one another, which may prevent me from making sense of a good chunk of this faunal data. I'm still determined to at least create a poster to present at one of my school's research fairs.Posted 27th July 2014 by Monica 0

I was all over the place this week because I started my research project...and also started getting sick.

Monday was a lab day so we could finish analyzing artifacts from Cerro la Virgen. We got through the ceramics early in the day, and the TAs had to scramble to give us lithics, textiles, botanical remains, and ornaments to work on. Apparently, we're much more efficient than they expected--we processed everything, got to leave early, and grabbed mochaccinos from the gringo cafe down the road. 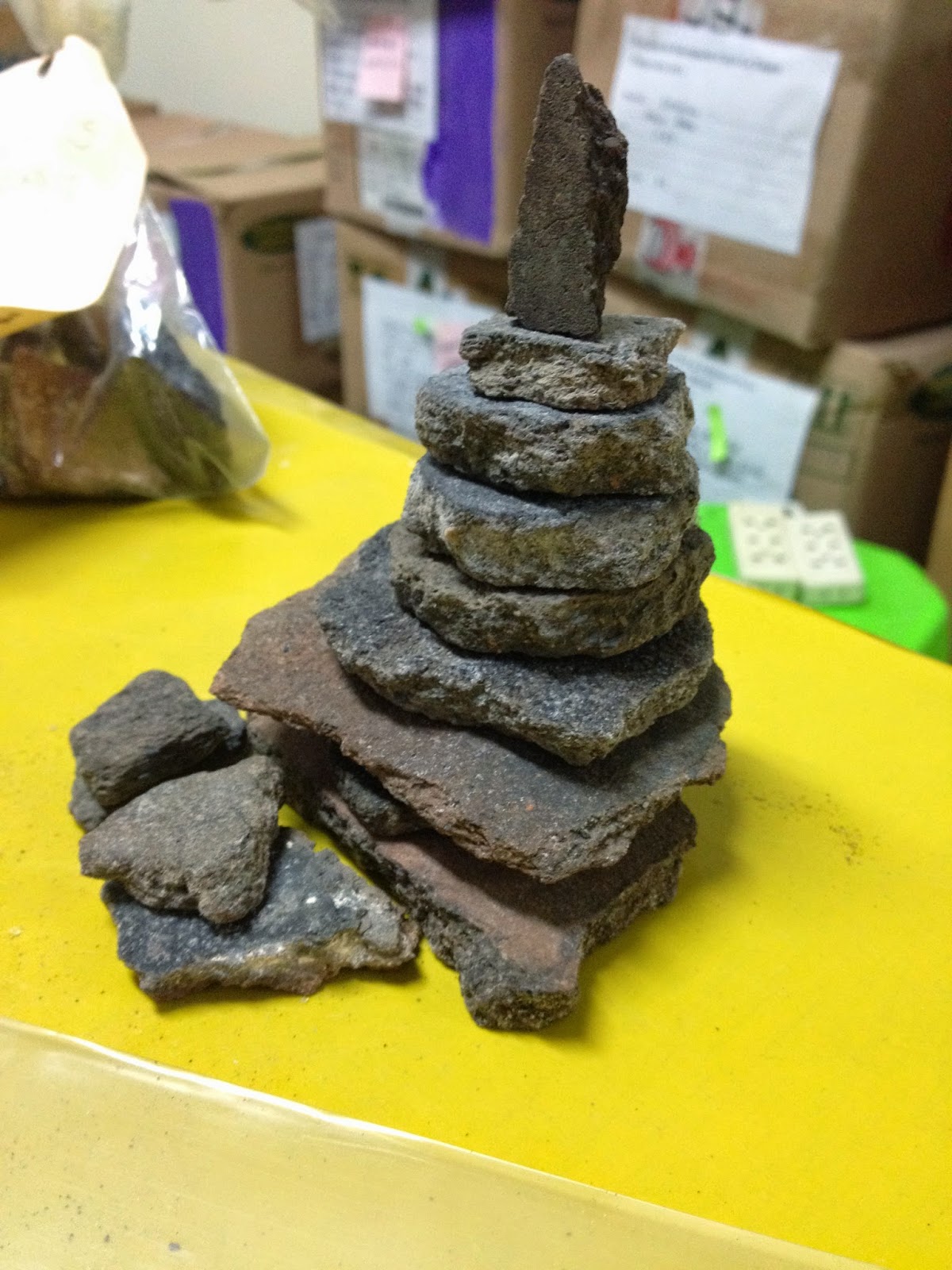 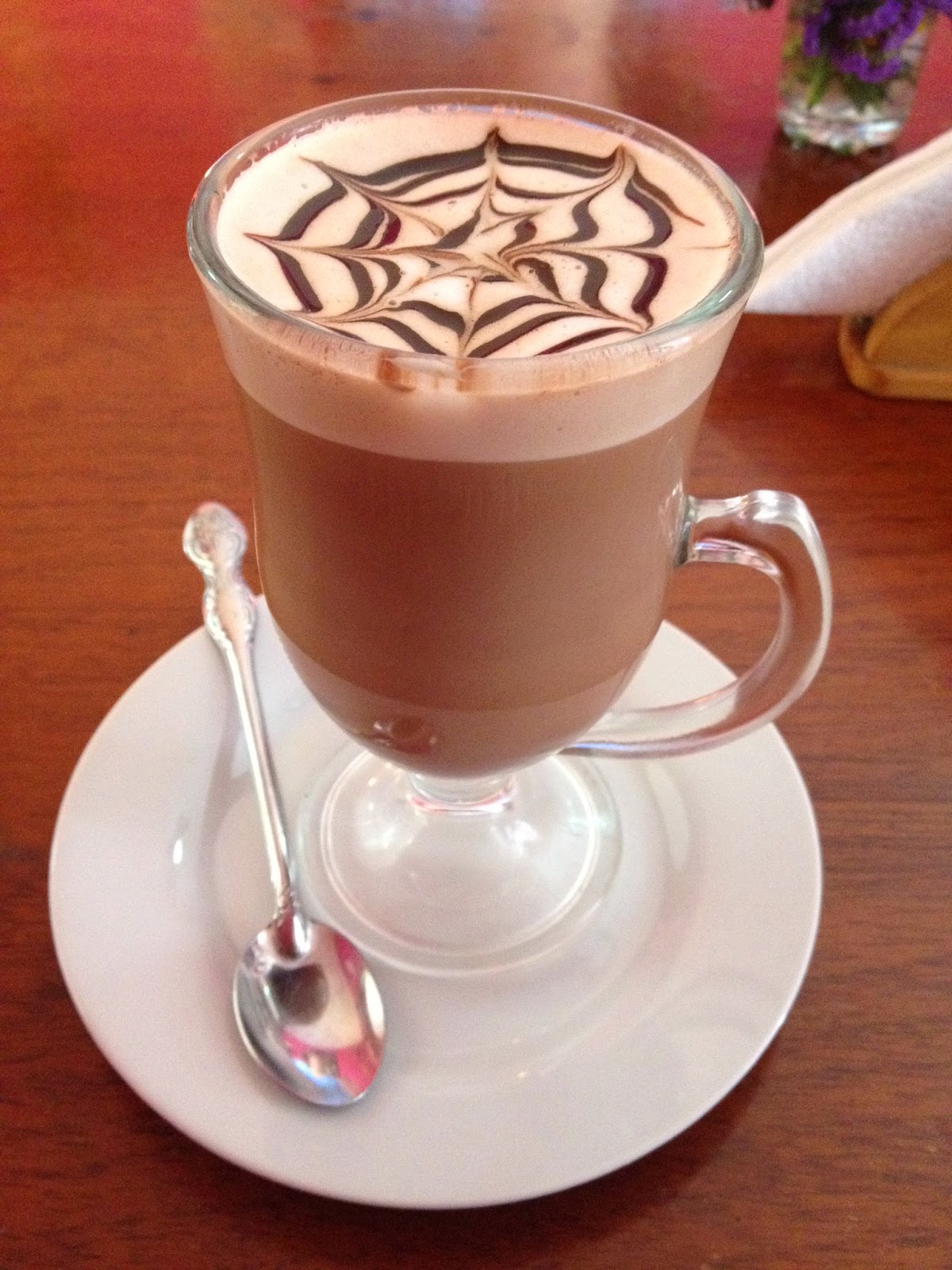 A mochaccino from Chocolate Cafe!Tuesday was not so easygoing. We returned to Cerro Leon, the first site we visited last week, and made the best of a bad situation. A few years ago, local farmers tried and failed to cut an irrigation canal through the site, destroying some ancient Moche house foundations in the process. However, the abandoned ditch gives a great profile of the occupation layers.  We first backfilled a section that a previous field school had already profiled, which amounted to chucking large rocks into a hole. A grand old time was had by all. 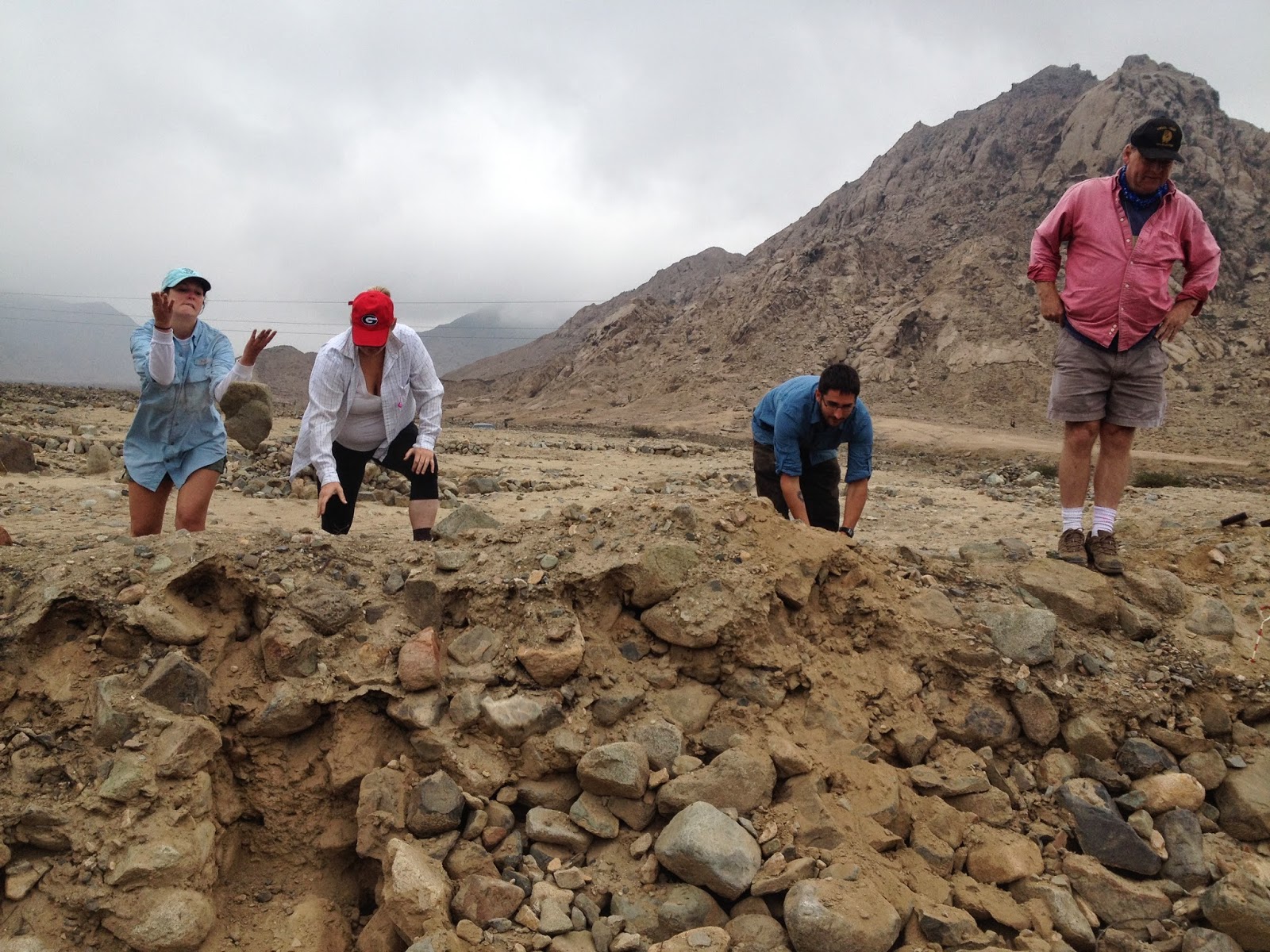 (from left to right) Lura, Emily, and Zach help backfill the trench while Brian supervises.Then, we opened profiles on either side of the test unit and spent the next few hours troweling away debris to find the original profile underneath. The upper meter or so was just disturbed rocks, but below that we found a hearth, walls of a house, and sediment layers from El Niño events. Wednesday, I took a break from the field and started my independent project! I originally wanted to study linear enamel hypoplasias in sub-adults from Cerro Oreja, but too many people were already working on that material. Instead, I'm analyzing fauna remains from the site--both burials and other contexts. I'll identify, photograph, and age animal bones in order to find patterns--if there are any--in how certain animals were used in certain contexts, and whether that changed over time. The catch is that I've only studied human osteology and know very little about archaeozoology... Remains of a dog (well, most of a dog) from Cerro Oreja.By the end of the day, though, I was getting the hang of it. It helps that Dr. Gagnon, the bioarchaeology field school director, showed me how to identify bone fragments--and also that most of the animals are dogs or camelids (llamas/alpacas), with the stray rodent mixed in. Those are all pretty distinct from each other. Thursday, it was back to the field for more digging. We cut and cleaned profiles perpendicular to the ground, mapped them, and collected, recorded, and sorted ceramics from each layer. Mapping was definitely the hardest part, especially because the boundaries between layers were vague. We worked in teams with one person measuring and the other drawing, and it was difficult to communicate what exactly we were supposed to draw and measure. Still, we ended up with a fairly accurate profile. David the TA explains the stratigraphy of the profile on the left.They chopped down the shade with machetes to make room for artifact screening.I was supposed to go out to the field again on Friday, but the microbes of Peru caught up with me and I was sick in bed most of the day. Oh well, better luck next week... By Sunday, I was well enough to help clean up trash Huaca Menocucho, a Formative Period mound of conical adobes built around 1800 BC. It's possibly the oldest huaca in the valley, but the local rural community of Jesus Maria has been forced to use it as a garbage dump because they don't have access to trash pickup--or many resources at all. MOCHE is trying to partner with Jesus Maria to preserve the site, develop it for tourism, and provide the community with essential infrastructure like latrines and waste disposal services. 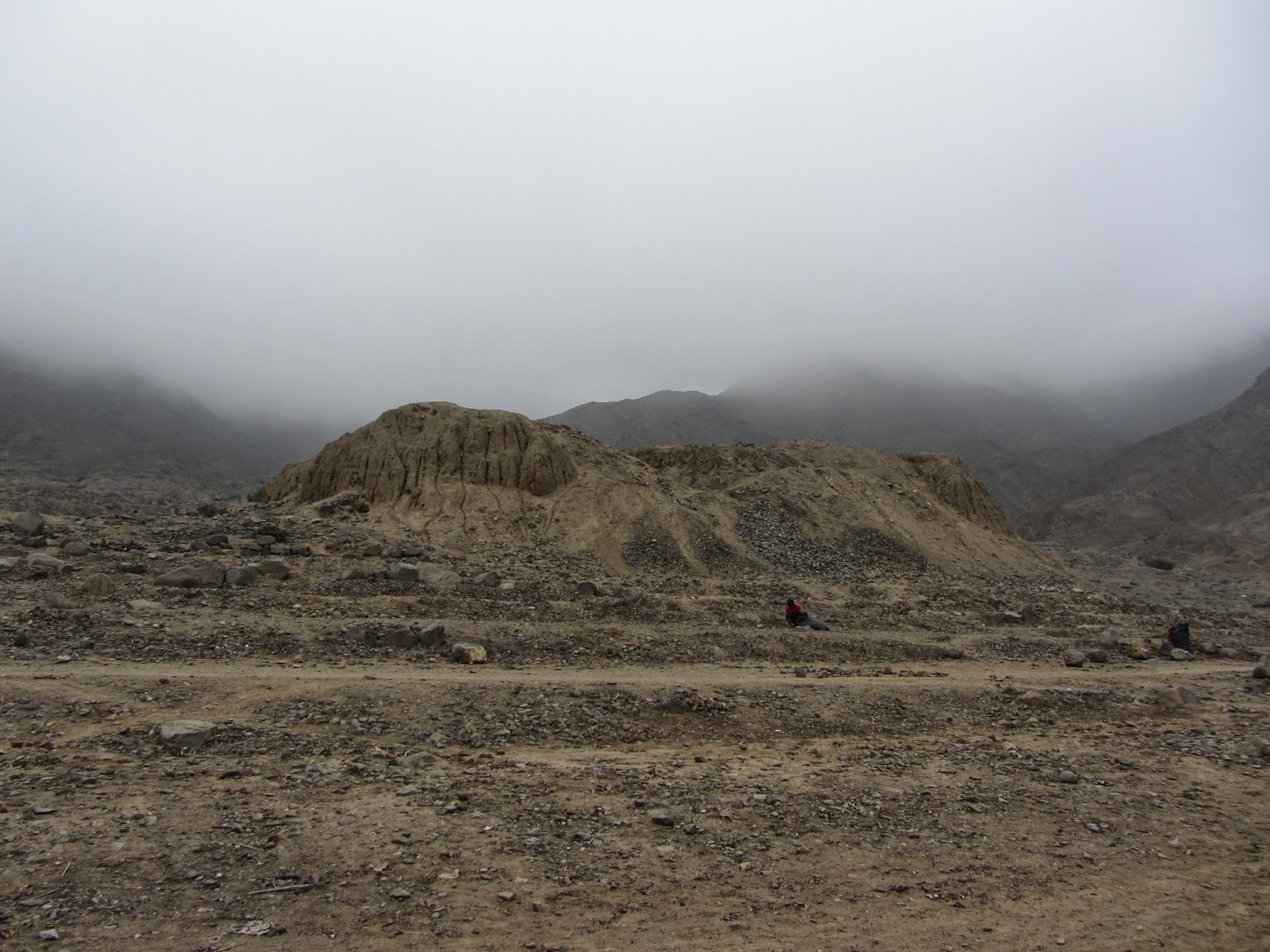 Huaca Menocucho, as seen from the lower terraces.Posted 21st July 2014 by Monica 0

This week, we mapped Cerro La Virgen, a Chimu town on the outskirts of Huanchaco that's in the process of being destroyed by an illegal quarrying operation. It's over five centuries old and lies along an Inca road that runs from the old Chimu capital of Chan Chan to the Inca provincial capital further inland. 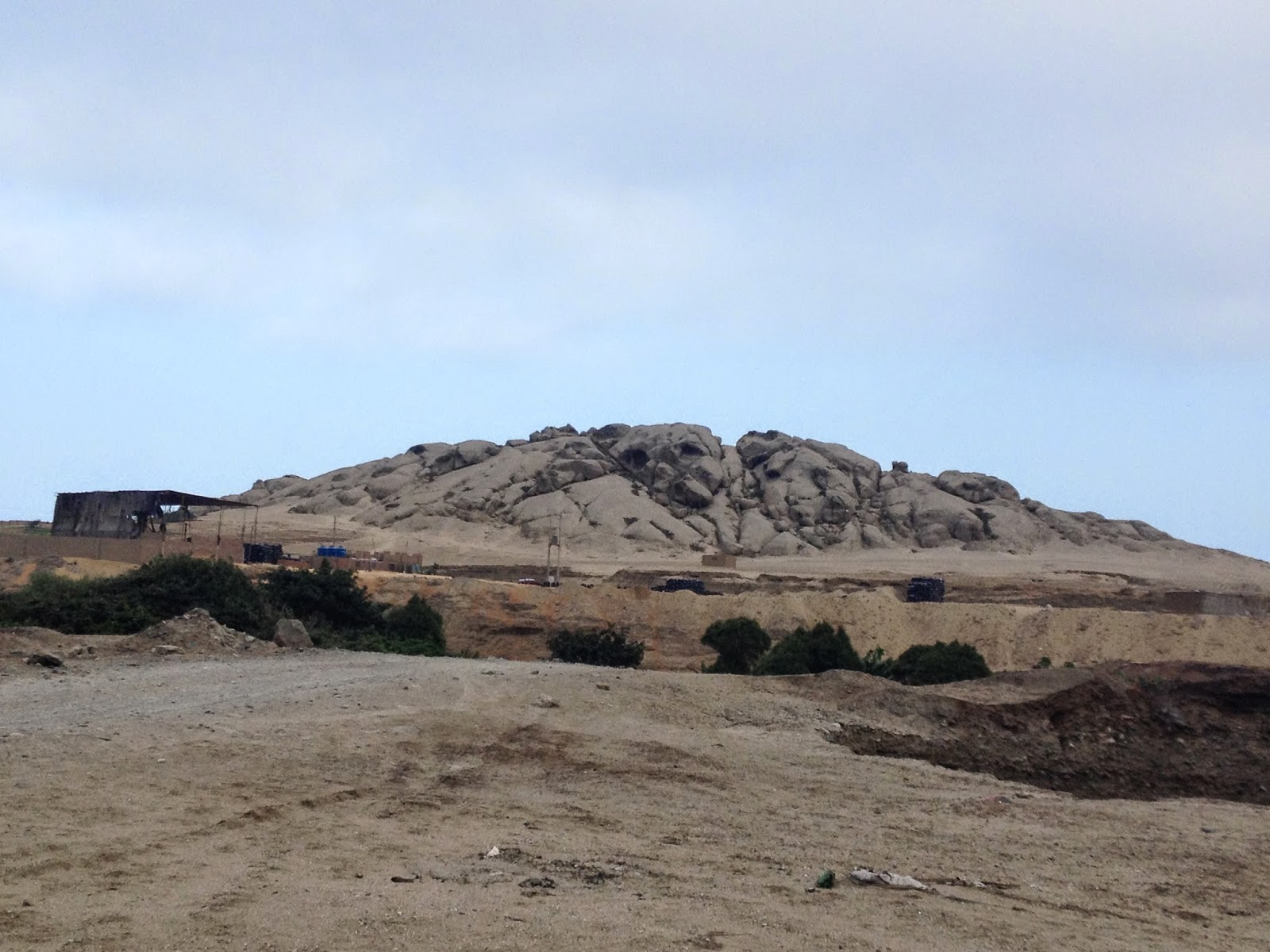 The Cerro la Virgen, the rock outcrop after which the site is named. The preservation here is amazing. Plant remains and textiles that would decompose at most other sites are desiccated and intact thanks to the hyper-arid environment. Also, the quarry pit has revealed a deep and expansive profile of all the occupation layers. 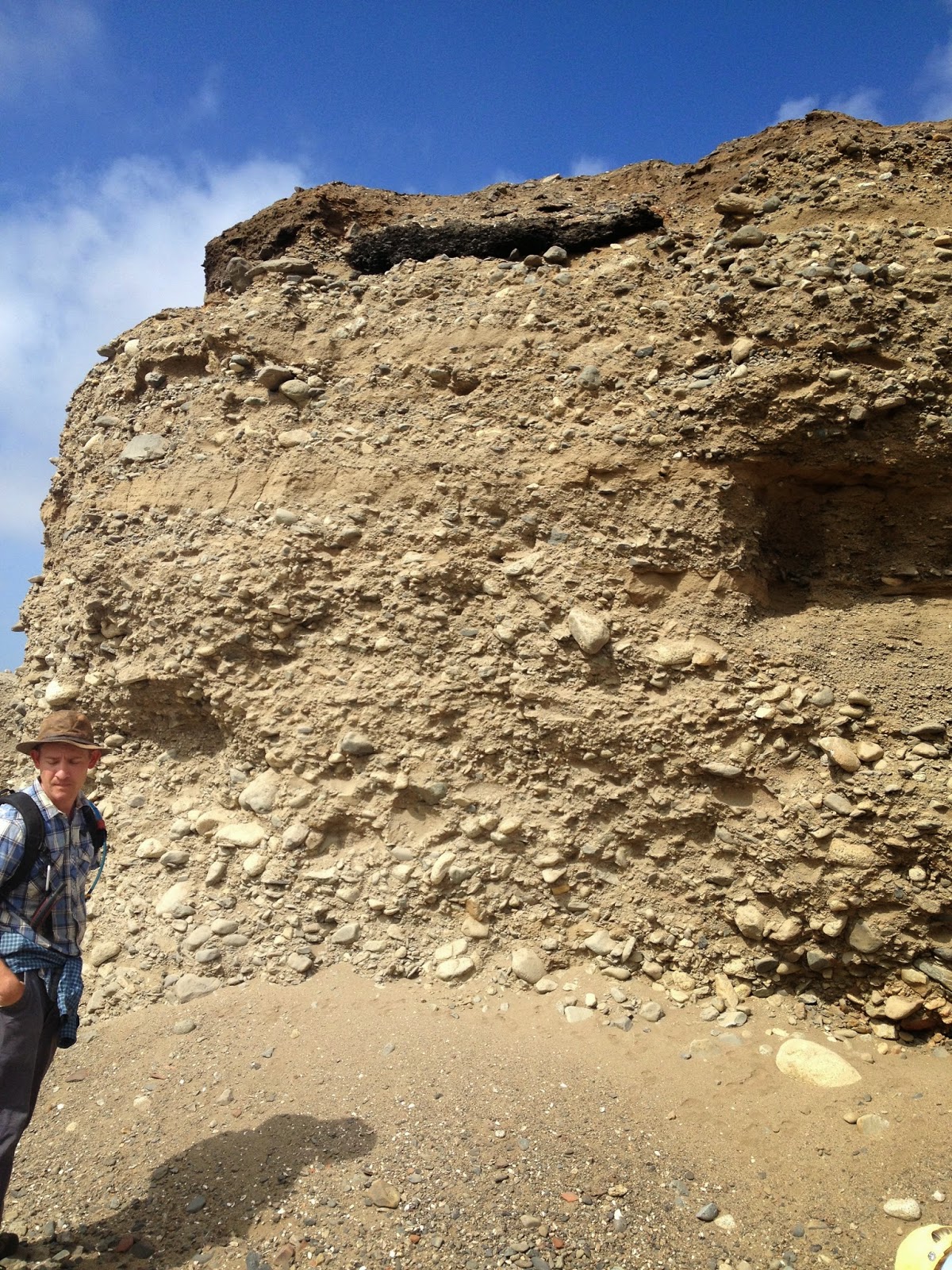 David the TA, standing next to a profile in the quarry. The black band near the top is an intact hearth. 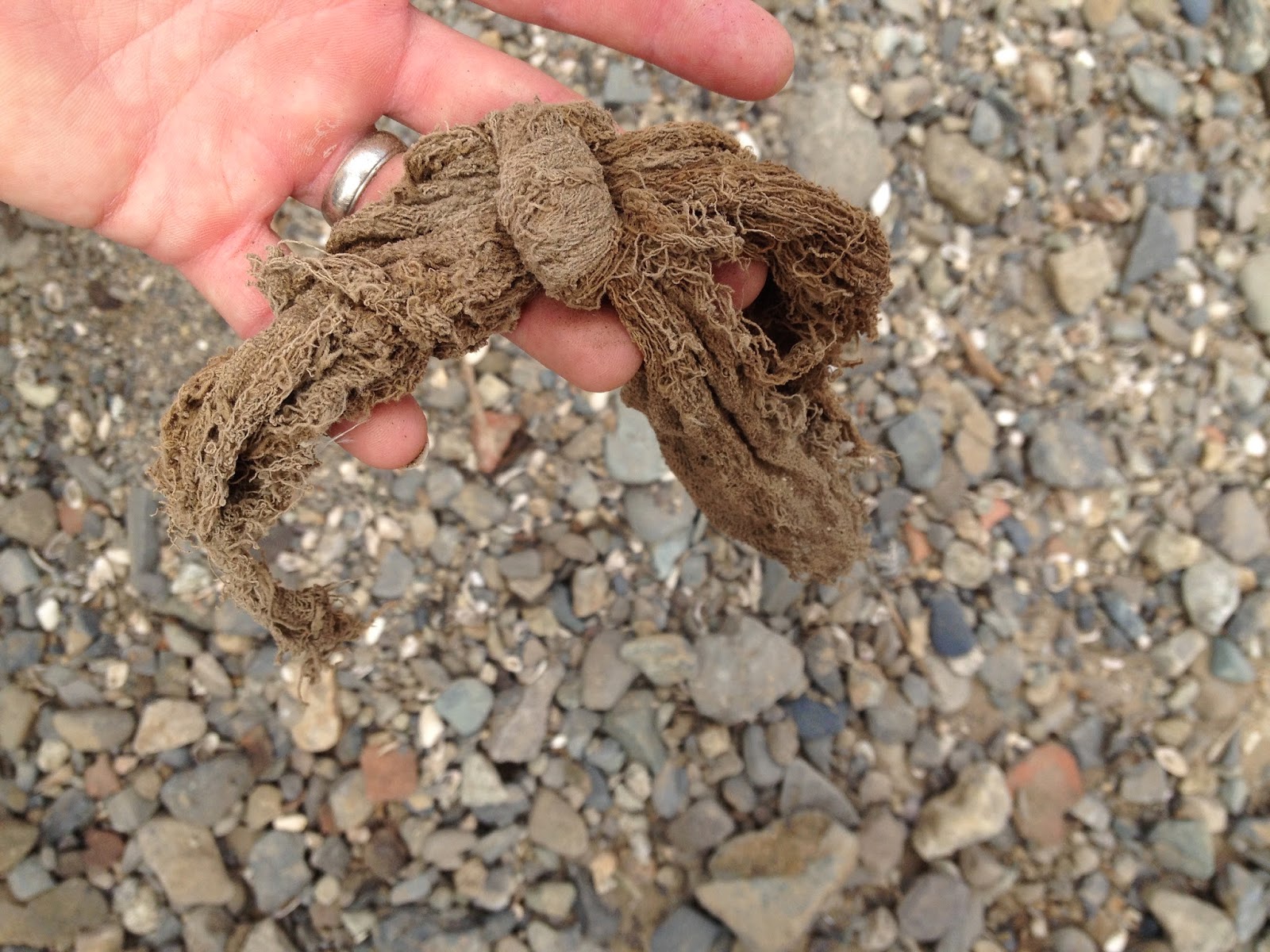 A knotted textile fragment found on the surface. Jesus, the other co-director of the project, had roughly mapped the site in 2011. Using his data, we split into teams of three and recorded the wall thicknesses and re-measured the lengths. Only the foundations of the walls remain, as the upper parts were waddle-and-daub structures that decomposed after a few decades of use. Most of the walls were collapsed, so determining their original widths was one of the most difficult parts. My group finished mapping our assigned section of the town on Thursday, and we spent all of Friday in the lab. Brian taught a short workshop on ceramics analysis and we spent the rest of the day sorting potsherds excavated from Cerro la Virgen the year before. 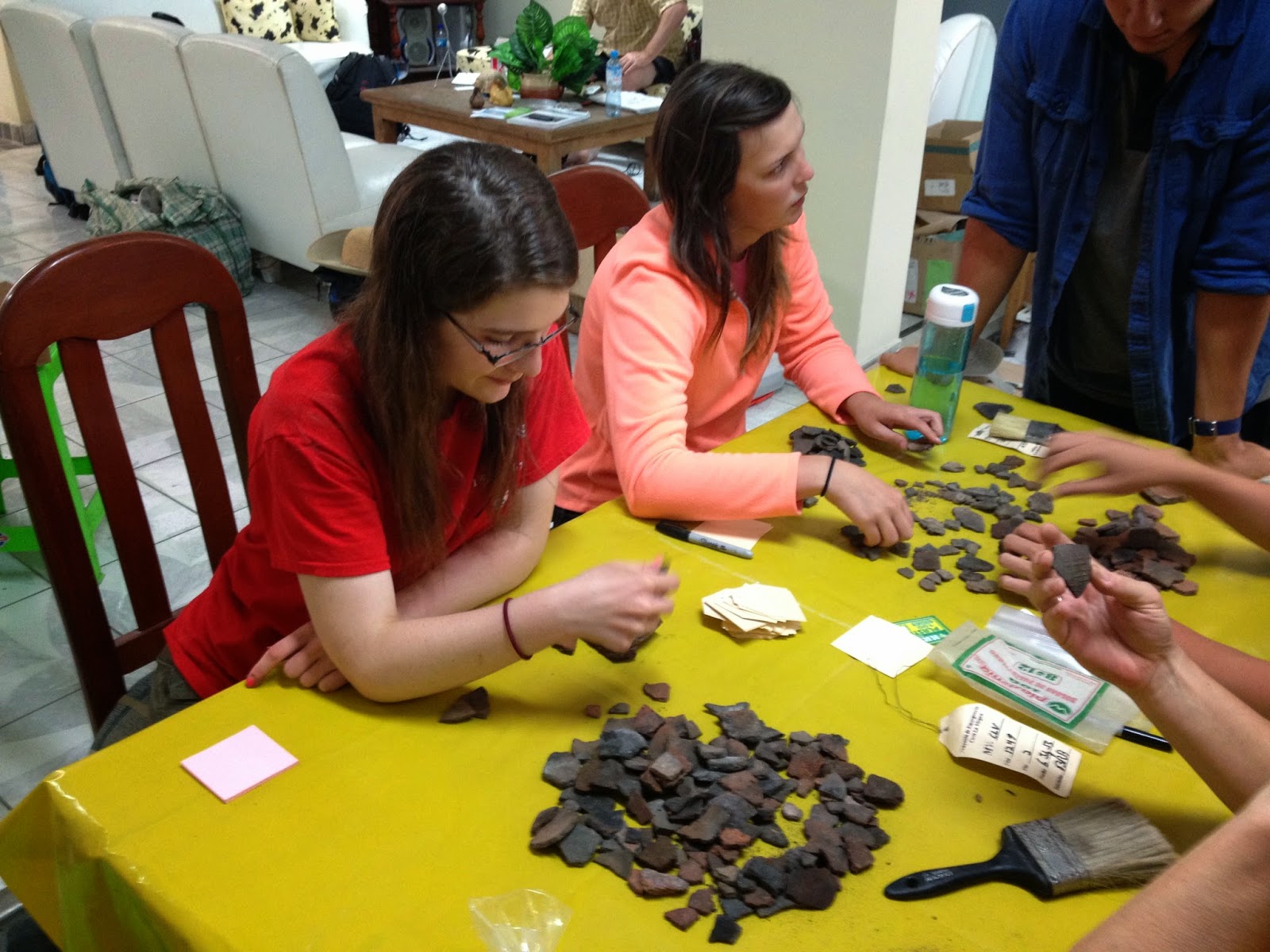 Me (left) and Lura (right) sorting sherds in the lab. I've taken ceramics analysis classes before, but those were mostly petrography-focused, so it was nice to learn how to analyze sherds macroscopically. The Chimu ceramic sequence isn't well understood, so by roughly categorizing these sherds, we're helping build a more refined chronology.  Posted 14th July 2014 by Monica 0

I landed in Trujillo on Wednesday morning, so the first week of field school was a short one. We got a crash course in Peru and visited two of the Moche Origin Project's former excavation sites: Cerro Leon and Cerro Oreja.

Cerro Leon is a mountain to me, but by Peruvian standards it's more of a hill (I've only seen mountains once before in my life). Along the bottom slope lies a looted cemetery. Right below is the associated town, one of the few systematically-excavated rural Moche sites. 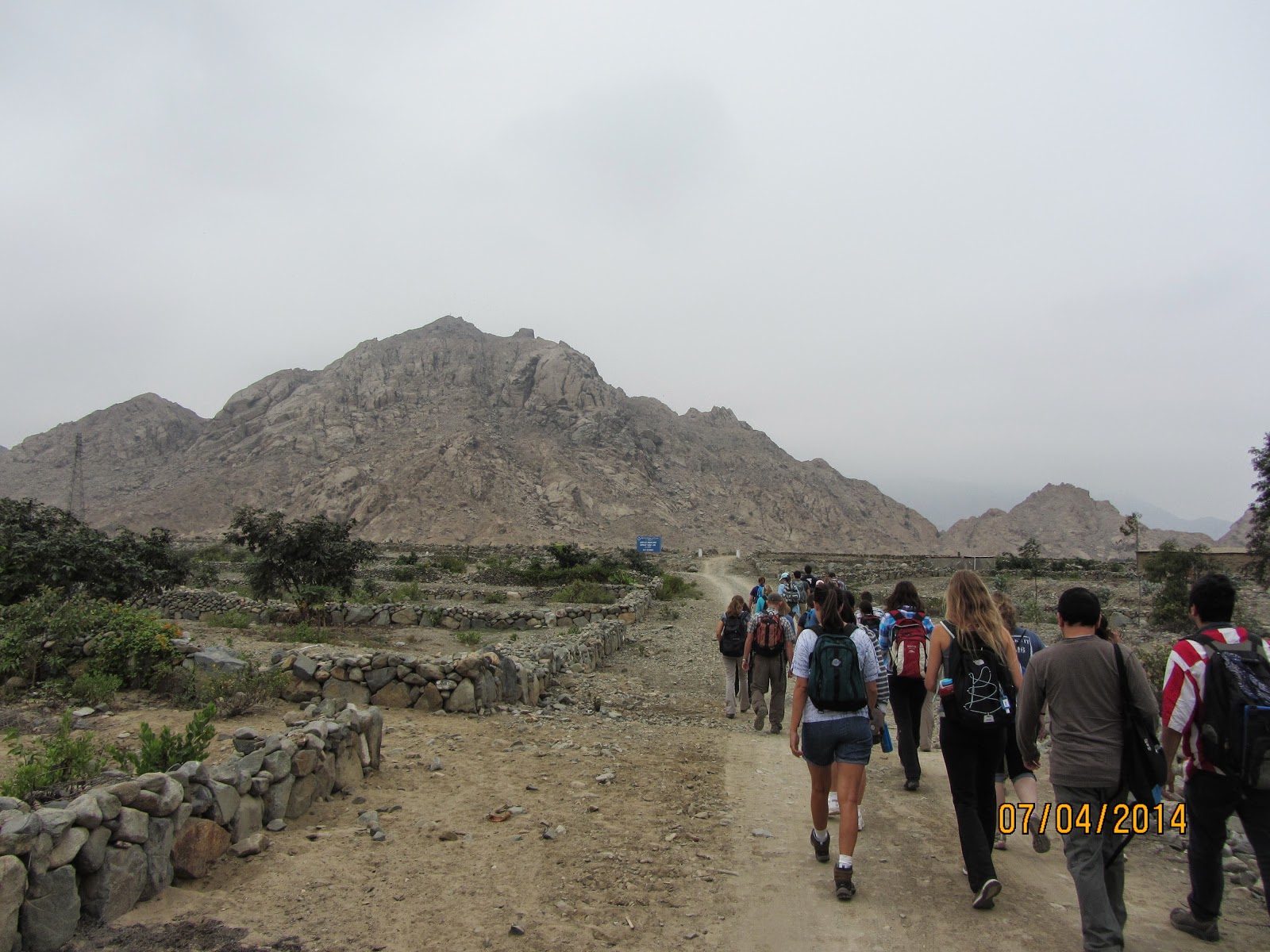 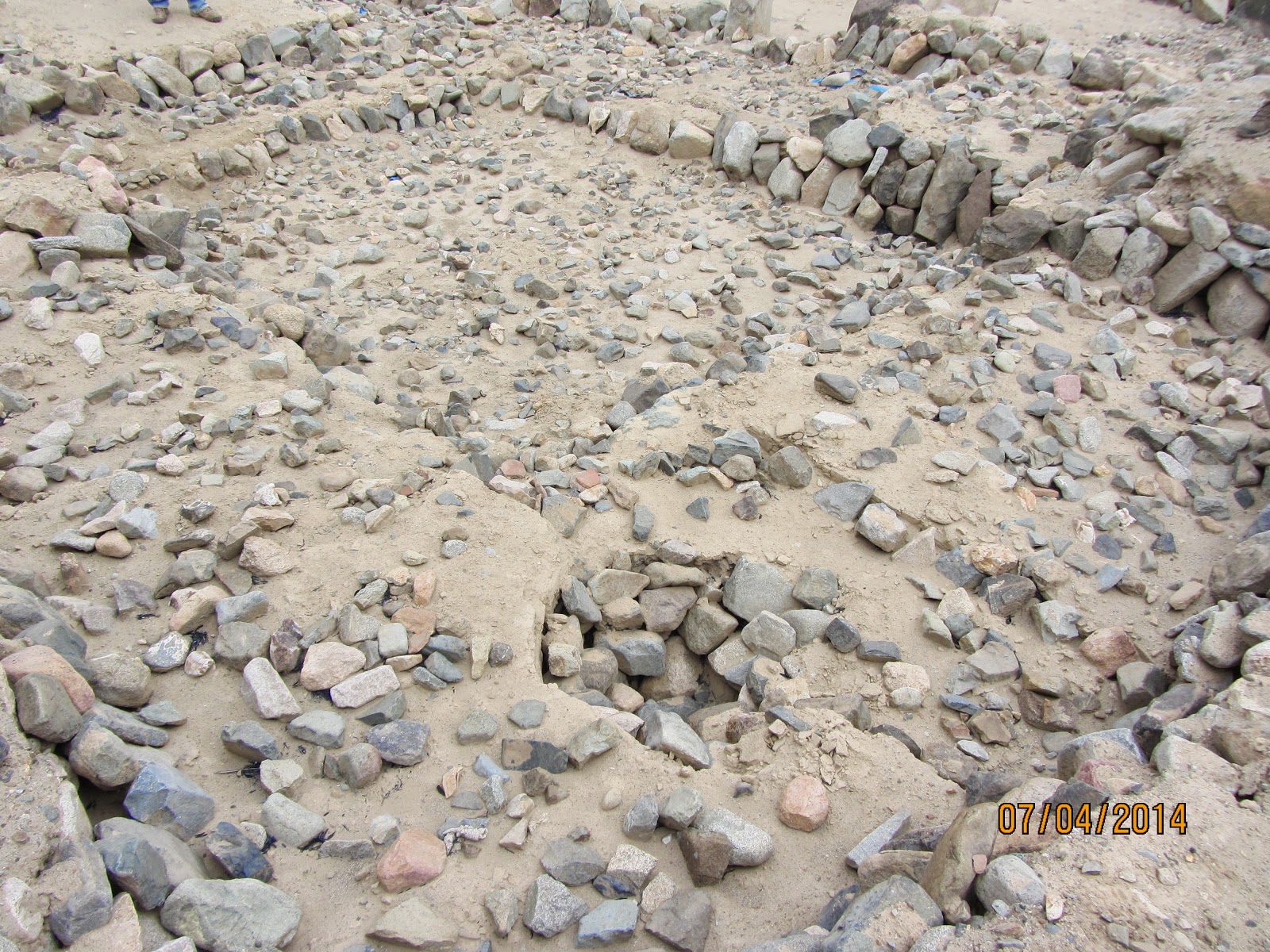 Backfilled house floor at Cerro Leon Most Moche archaeology has focused on the few elites who lived in major urban ceremonial centers like Cerro Blanco and El Brujo, and ignored the people in rural areas who provided the labor and resources upon which Moche society was built. MOCHE, Inc, the non-profit associated with the field school, has partnered with a local community to protect the site: they stave off land-grabbers and looters in exchange for help with development projects, such as a potable water system and a community center.

The second site we visited, Cerro Oreja, has a less uplifting story. Salvage excavations in the 1990s collected some data from the site's cemetery before it was destroyed by a large-scale irrigation project. The ruins of the associated town lie on the slopes of the mountain between the cemetery and the adobe platform mound close to the peak. The site includes some of the few well-recorded burials from the Gallinazo culture, which shed light on how its successor, the Moche culture, developed.

I'd never hiked before, or even gone camping, but I made it up to the platform mound with the rest of the group! Of course, climbing down was much more harrowing than climbing up...

Panorama from the platform mound of Cerro Oreja
17 views0 comments